Having lived for over half a century, I no longer want or desire anything from my workplace, but what is worth remembering are the bits and pieces of memories of being with loved ones.

My relationship with my daughter was good while she was growing up.  During her childhood, her school was not far from home. Occasionally I held her hands and walked her to school. Sometimes, we would stop by McDonald’s after school to buy a Kids’ Meal. Finding the little gift inside delighted her.  After dinner, I would take her to the park to get on the swing. She broke into joyful laughter as I pushed her swing up high. Often, she would linger on, not wanting to go home.  Our skies were filled with great joy when my daughter was little.

Growing up, she started hanging out with her friends in high school.  There was a sense of inexplicable loss and insignificance when she didn’t come to me anymore.   When we were together during the 15-minute car rides, the time only allowed us to chat about “How was school today?”  After a simple response, she would turn her eyes to the cell phone.  Sometimes when glancing at her from my rearview mirror, a strange feeling surged in my heart that my daughter was seemingly unknown yet so familiar to me.

Our family was poor when I was young. Father and Mother both had to work hard to raise the three of us.  They had no time, nor did they know how to sort out my emotions.  A melancholic youth, I spent several doleful years as a teenager.  In university, I had the chance to heal from my depression.  So, I embarked on a career to help myself while helping others, which is a blessing from God.  I told myself not to sacrifice my life for the workplace because I didn’t want to repeat the same unintentional neglect my parents made, failing to provide emotional care for my family.  I want to be involved in my children’s world as they grow up.

My daughter is lively, optimistic, and carefree, with nothing for her parents to worry about. Yet, one night, there was sadness on her face.  When her mother went to comfort her, tears rose in her eyes, and as she sobbed, she said that her friends had misunderstood her.  I did not know what to do or say other than standing next to her. After she told her story and stopped crying, I hugged her and whispered in her ear, “Daddy loves you and supports you.”  A gush of warmth filled my heart when she put her head on my shoulder.  In this moment the distance between us drew closer.  Actually, all a daughter needs from her father is not his psychological interpretation or his preaching. She needs only his tender loving care.

The skies a father and a daughter grow in are usually about trivial daily interactions in their world.  For instance, after I cleaned up her hair clogged in the bathtub, I’d get a “Thank You!”  After helping her book an airline ticket, she would send Daddy an emoji heart or a like!  Last year she shared an apartment with college friends.  She purchased a bed from the furniture store.  As her father, I naturally volunteered to help.  I spent two to three hours putting the new bed frame together, and then laid the mattress on.  Immediately, she jumped onto the bed!  It was so wonderful to see her acting like a five or six-year-old innocent little girl again, even for a moment.  She ran over and thanked me with a kiss.  The joy in my heart left me speechless!

Men are generally of few words with no visible display of their emotions.  He might be skillful at installing and repairing things at home, but when it comes to handling his own and other people’s emotions, he finds it quite challenging.  To be a part of his daughter’s life, father must humble himself, in giving her more hugs, and saying “I love you” more often.  At first, it might feel somewhat uneasy, even mushy, but he will get used to it gradually! 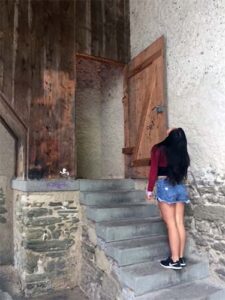 When a daughter is grown up, a father must put away the “I am always right!” attitude and learn to be a good listener and practice two-way communication.  It is a father’s instinct to protect his daughter, but at the same time, he must remember not to deprive her of her autonomous space.  A sister in her 30s shared a childhood incident at her sixth birthday party. When it was time to open presents, she tried for a minute or two to open one but was unsuccessful.  Her father immediately came over and yanked it open for her.  She said she knew that her father only wanted to help, but in doing so, he spoiled that happy moment of opening and seeing that present herself.  A father must know to respect his children’s personal space, and he doesn’t have to stick his nose into everything.

In the daughter’s world of growing up, the skies may be sunny or gray. If she falls into the vortex of emotions, a father must understand and accept that the road to maturity is long and complex.  Men often like to be lone fighters, but when tired and disappointed, they keep it hidden, choosing to resolve it on their own.  Thus, fathers often feel lonely and alone.  So, a father must break away from that male stereotype; know how to express his own feelings, and work together as concentric counterparts with his own spouse in raising children.  Confide with friends, and if necessary, seek professional help.

For the past several years, I cherished each opportunity to be alone and chitchat with my daughter. On her birthdays, I would invite her for breakfasts or lunches.  When she came home from college, I would ask her into my study room and talk with her on her current situations. Even though she did not pour her heart out to me every time, I hope she will never forget that the skies may not always be blue, but Daddy will always be at her side!